The Elias String Quartet take their name from Mendelssohn’s oratorio, Elijah, of which Elias is its German form, and have quickly established themselves as one of the most intense and vibrant quartets of their generation. The Quartet was formed in 1998 at the Royal Northern College of Music in Manchester where they worked closely with the late Dr. Christopher Rowland. They also spent a year studying at the Hochschule in Cologne with the Alban Berg quartet. Other mentors in the Quartet’s studies include Peter Cropper, Hugh Maguire, György Kurtág, Gábor Takács-Nagy, Henri Dutilleux and Rainer Schmidt.

The Elias was chosen to participate in BBC Radio 3’s New Generation Artists’ scheme and was also a recipient of a 2010 Borletti-Buitoni Trust Award. They have performed at some of the world’s most prestigious chamber venues, including New York’s Carnegie Hall, the Washington Library of Congress, the Vienna Musikverein, the Berlin Konzerthaus, the Amsterdam Concertgebouw and the Wigmore Hall in London. They recently returned to the US for a tour, visiting Napa Valley, New Orleans, Appleton, Harvard and New York, as well as further performances across Europe in Heide, Hamburg, Amsterdam, Rapperswil, Weesp, Verona and Perugia.

With the support of the Borletti-Buitoni Trust, the Elias Quartet mounted “The Beethoven Project”: learning and performing all of Beethoven’s string quartets whilst sharing their experience through a special website (www.thebeethovenproject.com) and social media. Their six programme quartet cycles in Brighton, Bristol, Norwich, Reading, Southampton, Tonbridge, and Whitehaven, concluded in Spring 2014, and the cycles at the Wigmore Hall, Music in the Round in Sheffield, and Glasgow Concert Halls concluded in 2015. 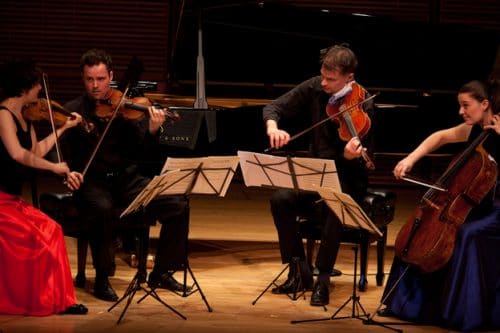