Darragh Kelly is a London-based composer. He completed his studies in Trinity College Dublin this year, under Linda Buckley and Evangelia Rigaki.

His music philosophy and compositional interests can be considered indivisible, primarily dealing with what is variously termed conceptual or post-conceptual music. His work has been performed by leading musicians, including soprano Michelle O’Rourke (Ausgang), Peter Brötzmann (with Crash Ensemble’s Kate Ellis on cello and David Stalling on modular synthesizer, performing Carly Rae Jepsen est mort). His latest piece, Bass Flute Master Class or “‘Set Fire to the Rain – Bass Flute Cover’ Cover(s)”,for bass flute and video, was performed by Bill Dowdall in February.

The monochrome is an alchemy, effective liberation from personality. It articulates silence. It is a fragment of an immense work without limit. The blue of the landscape of liberty. – Derek Jarman

Inspired by Derek Jarman’s film Blue,this piece for string quartet is an exploration of colour, what that means with regard to the musical material both historically and now, and why. Made while he was dying from AIDS-related illness, the visuals of Jarman’s film consist solely of a monochromatic blue screen—a reproduction of a painting by Yves Klein, which in turn forms the cover of my score. Over the course of the seven musical fragments, I variously sought to stare into Jarman’s eyes, his own vision disappearing due to cytomegalovirus retinitis; to stare into the dismembered face of Anton Webern, whose conclusive influence on the self and form in music looms large in this work; to stare into the blue. 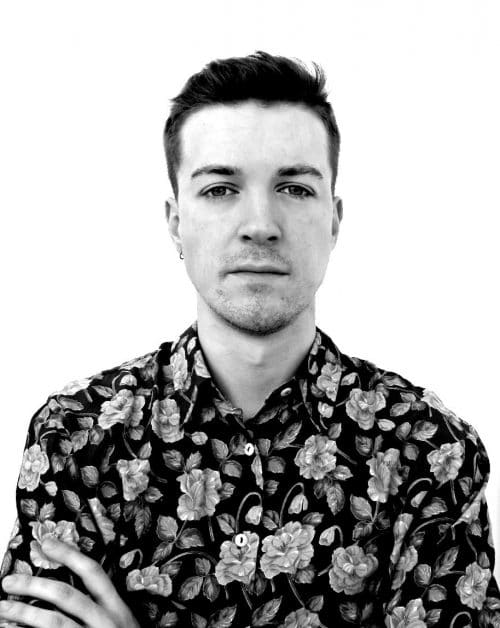