Winner of first prize and several other awards at the International Music Competition of the ARD in 2008, the Apollon Musagète Quartet has rapidly become an established feature of the European musical scene, captivating public and press alike. The quartet studied with Johannes Meissl at the European Chamber Music Academy and was inspired by the musicians of the Alban Berg Quartet at the University of Music and Performing Arts Vienna.

The quartet was nominated ECHO Rising Stars 2010, followed by highly successful performances at prestigious European venues. It was also named BBC New Generation Artist in 2012, leading to extensive touring in the UK and a number of recordings for the BBC. In 2014 the musicians received the Borletti-Buitoni Trust Award.

An essential element of the Quartet’s work is its collaborations with living composers such as Konstantia Gourzi and Krzysztof Penderecki; in addition to the traditional repertoire for string quartet, the group has had a number of works dedicated, often on the theme of its mythical inspiration Apollo. Moreover, the musicians focus on concert repertoire of the 20th and 21st century and recently recorded works by Panufnik and Palester.

Pawel Zalejski plays a violin by the Amati brothers from 1615 and Piotr Skweres a cello by Gennaro Gagliano dated 1741. The instruments that have kindly been provided by the MERITO String Instruments Trust. Furthermore, the quartet thanks the Thomastik Infeld for the generous support and the enterprise Stoffwerk for the exclusive and custom-made concert clothes. 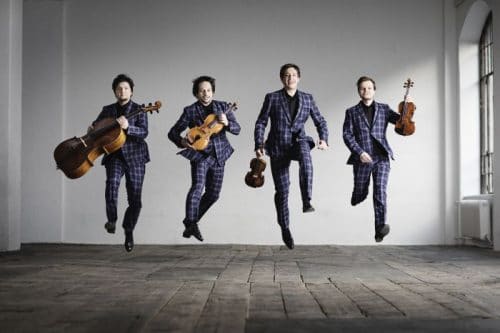