Andreas Reiner was born in Vienna and grew up in Eisenstadt, the city where Joseph Haydn spent many years of his life. He received violin instruction from Werner Ehrenhofer, Edith Steinbauer and Itzhak Perlman.

His talent became evident unusually early on and he played his first solo concerto at the age of just seven. Since then, he has given concerts in almost all European countries, in North and South America and in Japan. He has performed recitals with Christian Zacharias, Roger Vignoles, Aci Bertoncelj, Tzimon Barto and Jean-Yves Thibaudet. He has partnered Heinrich Schiff as violinist in the Double Concerto by Johannes Brahms on many occasions.

From 1984 to 1990 he was Concertmaster with the Luxembourg Radio Symphony Orchestra, the Düsseldorf Symphony orchestra, the Bayreuth Festival and the Munich Philharmonic under Sergiu Celibidache.

In 1991, Andreas Reiner founded the Rosamunde Quartet, remaining its first violinist until it disbanded in the autumn of 2009. The “Rosamundes” played in all major festivals and concert series. They were nominated for a Grammy, and received the “German Record Critics’ Award” twice, as well as the “Diapason d’or” and many other prizes, for their CDs, published on the label ECM.

The orchestra “KlangVerwaltung”, founded and led by Andreas Reiner, received an ECHO Klassik Award for the best symphonic recording of 2008 (Anton Bruckner’s 4th Symphony under Enoch zu Guttenberg live from the Musikverein in Vienna).

Andreas Reiner teaches chamber music at the Folkwang University of the Arts in Essen. 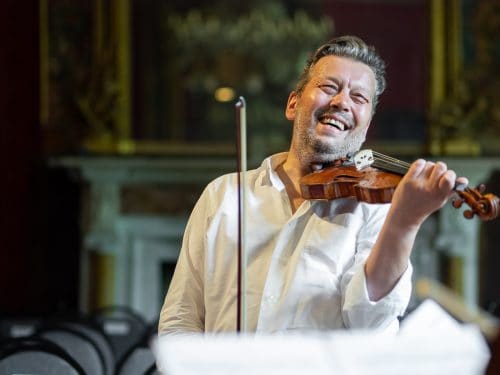 The Maritime Hotel
Find out more