As the Festival dates come closer, we will increase the tempo of the appearances of our weekly Archive concerts to prepare you for the twelve ‘concerts’ that will start on 26 June in our Virtual Chamber Music Festival.

Between today and 25 June, twelve concerts involving almost forty of the musicians, who were due to play in Bantry this summer, will be filmed in studios and concert halls across Europe and USA. These performances will be streamed each day on the dates of the Festival that never was. For our 25th Festival we will have to wait until next year.

Meanwhile you can hear a profound performance of Schubert’s last Sonata by Finghin Collins from his late-night concert on 30 June last year. This stupendous sonata is Schubert’s valediction, an epic work with its noble, unhurried melodies that defy time, his last miraculous song magnificently played for you by one of our own. 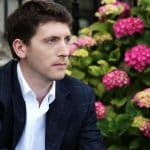 You’ll find all our Music Archive releases here – keep coming back to see the new additions!